Porsche is good at building race cars, and what the company learns on the track trickles down to its passenger vehicles. This is what makes driving them so rewarding.

Take a tour of the Porsche stand at the Frankfurt Motor Show 2011. Gordon Robertson guides us through the main highlights including the new Porsche 911 (Porsche 991), the Porsche 911 GT3 RS 4.0 and the Porsche Boxster E 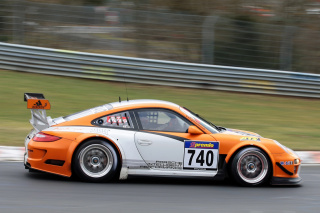 Version 2.0 of the Hybrid Porsche 911 GT3 R sports two 75-kilowatt electric motors on the front axle supplementing the vehicle’s 465-horsepower 4.0-liter, six-cylinder engine at the rear. According to German automaker, this setup “embodies the philosophy of ‘Porsche Intelligent Performance.'” Version 2.0 tips the scales at 2,860 pounds, down 110 pounds compared to its predecessor.

The Hybrid Porsche 911 GT3 R captures electricity during braking and stores it in a flywheel. During acceleration, this energy is sent to the front wheels to supplement the power cranked out by the vehicle’s combustion engine. According to Porsche, this leads to a reduction in fuel consumption and increases the vehicle’s range on the track. We’ll see how the Hybrid Porsche 911 GT3 R Version 2.0 performs when it laps Laguna Seca for a grueling six hours on September 17.

Porsche has revealed what will be the last incarnation of the ’Porsche 997′ Porsche 911 GT3 Cup car before it makes way for the  new Porsche 911 ’Porsche 991′ which will hit our showrooms next year. However, this Cup car will get a stay of execution, with Porsche offering it for competition use in the 2012 and 2013 race seasons.

Endurance racers will benefit from the addition of the car’s new 100-litre FT3 safety fuel tank, which feeds an engine with a near-identical specification to the unit found in Porsche’s GT3 RS road car, namely a 3.8L naturally-aspirated six cylinder – good for 450 hp.

Drivers taking part in the Porsche Mobil 1 Supercup, which supports the Formula 1 circus, will be offered the luxury of Porsche Ceramic Composite Brakes (PCCB). This lightweight option is also available on the RS road cars (for around €6,000), and helps to shed 20 kilograms from the car’s weight when substituted for the composite cast brakes found on Carrera Cup and GT3 Cup Challenge cars.

It is the most successful race car on earth: The Porsche 911 GT3 Cup. With over 2,200 units sold, it is the undisputed number one amongst customer racing teams all over the world. Now, the new Porsche 911 GT3 Cupfeatures a 100-litre FT3 safety fuel tank, which is filled via an opening in the front bonnet. Compared to its predecessor, the vehicle is now suitable for an even wider range of endurance racing. Moreover, the new fuel tank contributes to a further improvement of the high safety standards.The 2012-spec Porsche 911 GT3 Cup is based on the lightweight Porsche 911 GT3 RS (Porsche 997) street sports car. The power unit is largely identical to the production engine of the Porsche 911 GT3 RS with the same output of 450 bhp and the same maximum engine speed of 8,500 rpm. A race exhaust system with a controlled catalytic converter keeps emissions to a minimum.The flared wheel arches at the front axle accommodate light alloy rims measuring 9.5Jx18 with 25/64-18 Michelin race tyres.

The light alloy rims at the rear measure 12Jx18 with 30/68-18 tyres. Depending on the type of racing, the new Porsche 911 GT3 Cup features different rim specifications. The blade-type anti-roll bars at the front and rear are adjustable in seven positions allowing an extremely precise set-up for each race track. Exclusive to the Porsche Mobil 1 Supercup which runs as support to Formula 1 is the PCCB Porsche Ceramic Composite Brake. This is also available for Porsche’s road models. Compared to the composite cast brakes in the Carrera Cups and the GT3 Cup Challenges, PCCB reduces the weight of the car by around 20 kilograms.
The cockpit of the new Porsche 911 GT3 Cupcaters for the needs of the driver. The controls for the info display are positioned on the steering wheel which houses six switches. As in the production car, the reach and height of the steering wheel can be adjusted.

The new Porsche 911 GT3 Cup will be delivered to teams around the world from September and will be run in this specification for the 2012 and 2013 race seasons in selected one-make cup series. The price is 161,750 Euro plus value-added tax of the respective countries.

Porsche announced Thursday that it will enter the LMP1 ranks with a factory-run prototype in 2014. The news, confirmed via a news release and video on its official YouTube channel, comes after much speculation that the German manufacturer would step up with an official works program in the near future.

While no further details have been released beyond confirmation of an all-new prototype, destined for the 24 Hours of Le Mans, it comes as welcome news to the sportscar racing world, which has seen primarily a two-horse factory race between Peugeot and Audi in recent years.

It’s unclear what implications, if any, today’s announcement could have on Audi, Porsche’s sister brand, which recently notched up its 10th overall victory at Le Mans. An official statement from Audi is expected to be forthcoming.

“Motorsport was always an essential part of the Porsche brand,” said Matthias Müller, President of the Executive Board at Porsche AG. “So for us it was only a matter of time before we returned as a factory to the top league of racing. Porsche’s successes in Le Mans are unrivaled. We want to follow up on this with the 17th outright victory.”

With 16 overall victories, Porsche is the most successful manufacturer at Le Mans. The most recent came in 1998 when Allan McNish, Laurent Aiello and Stephane Ortelli drove a factory Porsche 911 GT1-98 to top honors.

However, Porsche’s most recent venture into prototype racing came with the RS Spyder, which Penske Racing ran as a factory program from 2005-2008 in the American Le Mans Series. The LMP2 contender was also made available to customer teams, racking up two class victories at Le Mans and a total of 13 overall victories, 35 class victories and 12 championships during its five-year run in the ALMS and in Europe.

“We’re looking forward to the task of developing new technologies and to continue on with the success of the Porsche RS Spyder,” said Hartmut Kristen, Head of Porsche Motorsport. “After the conclusion of our works-supported sports prototype program in the American Le Mans Series we have kept up with the latest technological advances.

“Now we will begin with detailed research in order to evaluate the various concept alternatives for our new car. These obviously depend on how the regulations for the year 2014 look in detail. In principle, these regulations are interesting for us because the integration of our hybrid technology in the vehicle concept is one possible option.”

Porsche’s entry into LMP1 in 2014 will coincide with the Automobile Club de l’Ouest’s new set of prototype regulations, which is expected have a bigger emphasis on energy consumption.